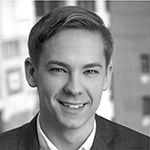 Born and raised in Tennessee, Brendan grew up captivated by houses. Eager to pursue a career related to his passion, he obtained a Bachelor of Architecture degree from the Fay Jones School of Architecture at the University of Arkansas. While in school, he studied abroad in Rome where he focused on hand drawing, as well as indulging an interest in the romantic side of architecture. As an intern at Renfro Design Group in New York, he was afforded the opportunity to work on notable projects such as the Metropolitan Museum of Art and the New-York Historical Society. After graduation, Brendan joined the McALPINE team in Montgomery for two years prior to relocating to help establish the New York office. Brendan now enjoys his active Manhattan life, taking advantage of the city’s countless offerings.
Brendan can be reached at our New York office.
Email Brendan.