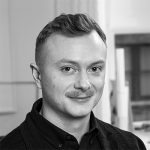 Neall hails from Portland, Maine, where he began his architectural education renovating Victorian cottages with his father on Peaks Island. He attended Wheaton College in Norton, MA, where he graduated with degrees in Political Science & Art History and was the captain of the tennis team. Upon earning his Master of Architecture degree from The Taubman College of Architecture and Urban Planning at the University of Michigan in 2017, Neall cut his teeth at Ryan Salvatore Design in New York before joining McAlpine in 2019. He is an avid collector and a voracious student of architectural history and material culture.
Neall can be reached at our New York office.
Email Neall.