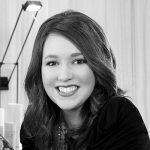 Meredith hails from the small town of Milan in west Tennessee and graduated from the University of Tennessee College of Architecture and Design. During her time at the university she participated in a study abroad program at the Danish Institute in Copenhagen spending five months studying Scandinavian design and traveling throughout Europe. Following an internship at the Knoll showroom in San Francisco, Meredith came to work for McALPINE. After five years in Nashville, she moved north to help expand our New York office. Meredith is now back in her native Tennessee overseeing her projects from our Nashville studio. She loves to travel in her free time and her appetite for it continues to be fed by McALPINE with many international design projects. Meredith is enjoying being back in the south with her husband Garrett and their American bulldog-mix Rumpy.
Meredith can be reached at our Nashville office.
Email Meredith.