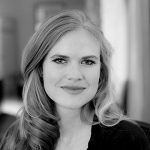 Garrett comes to us from Yale where she completed her Masters of Architecture. While there she was a teaching fellow in drawing for both undergraduate and graduate level courses. Garrett was selected to pursue research in England at the Paul Mellon Center for Studies in British Art and in Rome through Yale and the American Academy in Rome. Garrett’s BA in Plan II Honors and History is from the University of Texas at Austin. Prior to joining McALPINE, she interned with Tobin Smith Architect in San Antonio and For a Better Architecture in Austin. Garrett’s hometown is Beatrice, Alabama, just down the road from Bobby’s birthplace. Her delightful country life upbringing included riding cutting horses and still enjoys helping with her family’s cattle operation.
Garrett can be reached in the Nashville office.
Email Garrett.